This year, March 8 is particularly significant because it marks the centenary of the date women first gained the right to vote in Canada. In 1916, Manitoba became the first province to grant women the suffrage in provincial elections, along with the right to hold public office. Women have come a long way since then. For the first time in Canadian history, women now hold half of the federal Cabinet positions in the House of Commons.

To celebrate, here are just some of the women who have helped to make Canada great and who have influenced and inspired me:

Anderson was the editor of Chatelaine magazine from 1957-1977. As an activist, Anderson played an important role in championing women’s rights and advocating for social change through her editorials and the magazine’s content. Anderson’s editorials in particular were instrumental in applying pressure on the federal government to establish a Royal Commission to investigate the status of women in Canada. She also lobbied for the inclusion of women’s rights in Canada’s Charter of Rights and Freedoms in 1981. Under her tenure as editor, Chatelaine’s readership rose to over one million.[1]

During WWII, Stelco Steel in Hamilton, Ontario supplied steel for the building of ships, shells, and army transports. One of the largest steel producers in Canada, Stelco lost 1,500 men to the war. To fill the employment gap, the company hired women who worked in some of the toughest sections of the mill, including the blast furnaces. After the war, all of the women were fired. Between 1961 and 1977, no women were hired

at all. Only twenty-eight women, working in the tin mill and the cafeteria, were employed at Stelco while 13,000 men worked for the company. The disparity was challenged when five women launched a sex discrimination complaint against the company with the Ontario Human Rights Commission in 1979. The women won their case and Stelco was forced to hire 180 women, all of whom lost their jobs during massive layoffs by Stelco in 1981.[2]

In 1963, Judy LaMarsh was just the second woman in Canadian history to be appointed to a federal Cabinet position. As a minister, LaMarsh was instrumental in pressuring her cabinet colleagues to establish a Royal Commission on the Status of Women in Canada. She was also responsible for the implementation

of the Canada Pension Plan, designing Canada’s Medicare system, creating the Broadcasting Act, and overseeing Canada’s centennial celebrations as Secretary of State in 1967.[3] LaMarsh died of cancer in 1980, but her legacy lives on in the medical and social benefits that all Canadians enjoy today.

Ryan was the first white woman to arrive in Whitehorse in 1898 during the Yukon Gold Rush, mushing some 600 miles on foot along the Stikine Trail to get there. She established a successful restaurant business and regularly invested in gold. In 1900, Ryan was hired by the North-West Mounted Police as a matron to assist in the care of female prisoners. She was later appointed as a “Constable Special” to work as a gold inspector monitoring female smugglers. Ryan was so esteemed by the RCMP that when she died in Vancouver in 1932, the police force provided an honour guard for her funeral, a rare privilege that few women have been afforded.[4] 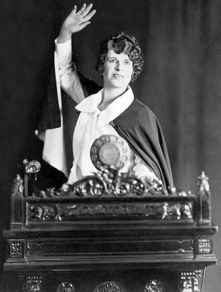 A missionary, radio broadcaster, evangelist, and author, Aimee McPherson was born in the small farming community of Salford, Ontario. McPherson’s evangelistic work landed her in Los Angeles where she established one of the largest Pentecostal churches in the world, Angelus Temple, in 1923. During the Depression, McPherson’s temple fed and clothed thousands of homeless and destitute in Los Angeles. But she is best remembered for her colourful preaching and unconventional approach to spreading her “old-time gospel” message. McPherson was ahead of her time. She used radio broadcasts, stage plays, magazines, newspapers, and even a float in the Tournament of Roses parade to draw people to church and to God, methods that would become commonplace later in the century.

In September 1974, thirty-two women arrived at the RCMP’s academy in Regina, Saskatchewan to begin training as the first women to join the RCMP. Although the RCMP signed up all thirty-two women at exactly the same time so no one woman would be able to claim that she was “the first,” the members of Troop 17 broke ground as the first female figures of authority in Canada’s national police force.

Lois Beckett served as a constable with the Sault Ste. Marie Police Force between 1949 and 1968. Although she held the rank of constable during those years, she was paid less than men of the same rank. She was also denied membership in the force’s association because she was a woman. Beckett sued the police force and the association for discrimination. In response, the department dismissed her from her duties as a constable and reclassified her as a clerk-typist. In 1968, her case went to the Ontario Supreme Court where Justice R. Fergusson ruled against Beckett, arguing that she should be paid less than her male colleagues because, as a woman, she did not perform the same duties as men and did not have dependents to provide for. To Fergusson, the lower rate of pay was justified since it conformed to “all the rules of civilization, economics, family life and common sense.”[5] Nevertheless, her demands for equal pay and equal rights brought the issue before politicians and the public, opening the door for women’s rights as police officers.

On January 28, 1914, members of Manitoba’s Political Equality League staged a “A Women’s Parliament” at the Walker Theatre in Winnipeg. The satire starred suffragist Nellie McClung as the premier of a mythical province where women were the political leaders and men were asking for the right to vote. The women acted out a parliamentary debate discussing why men should be denied the vote, using the same arguments Manitoba’s politicians employed. But it was McClung’s thinly-disguised parody of the province’s long-time premier Rodmond Roblin that brought the house down. The satire was a brilliant strategy that placed the issue of voting rights into proper perspective for many Manitobans. In 1916, exactly two years to the day after the mock parliament was first performed, Manitoba women became the first in Canada to exercise their right to vote in provincial elections and to hold public office.[6]

Executive members of the League following the passage of the suffrage bill in Manitoba, 1916.
Source: Manitoba Archives

[2] Meg Luxton and June Corman, “Getting to Work: The Challenge of the Women Back Into Stelco Campaign,” Labour/Le Travail 28 (Fall 1991).