1975 Human Rights in Canada, International Women's Year, Royal Commission on the Status of Women, Women's rights in the 1970s

2015: The Fortieth Anniversary of the United Nations’

As strange as it may seem to us in the twenty-first century, women’s rights were not always equated with human rights in Canada. In the 1940s, a number of Canadian provinces began to develop human rights legislation, particularly in an effort to protect racial minorities against discrimination. Saskatchewan was the first, enacting a statutory Bill of Rights in 1947. 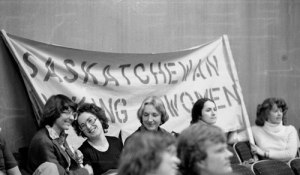 The issue of fair wages for women in the workplace was just beginning to be addressed, too. Ontario was the first to pass the Female Employees Fair Remuneration Act in 1951, with most other provinces following suit over the next ten years.[1] In 1960, the federal government developed a Bill of Rights which recognized the rights of Canadians to freedom of speech, religion, assembly, association, and due process.[2] None of these pieces of legislation, however, made it illegal to discriminate on the basis of sex.

When Canada became a member of the United Nation’s (UN) Status of Women Commission in 1958, some women’s groups were quick to point out that the federal government violated its commitment by failing to implement employment equity policies in its own institutions. Women were required to resign from their civil service jobs as soon as they married or became pregnant. Several government agencies such as the RCMP and the armed forces resisted employing women, Aboriginal people, and ethnic and cultural minorities with impunity. 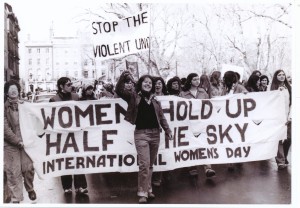 Activists pushed the federal government to honour the agreements it had ratified but not yet acted upon, with little success.

In 1968, the UN designated the year as the International Year for Human Rights. The Canadian government planned a number of events to celebrate. A conference was being organized, but not one woman was appointed to the planning committee. It was an ironic development that was not lost on activists who feared that any human rights

commission investigating the status of women in Canada would be comprised solely of men. As the planning for the humans rights conference demonstrated, their fears were justified and activists continued to lobby the government to establish a royal commission instead. The Canadian government hesitated on the grounds that Québec resisted federal impingement on the jurisdiction of the provinces. Judy LaMarsh, the only woman on the federal cabinet in 1968, quipped that it seemed “odd to think that in some men’s minds women belong predominantly to the provinces.”[3]

It was only after activists threatened to march three million women to protest on Parliament Hill in Ottawa, Ontario if the government continued to refuse to establish a royal commission that the prime minister finally relented.

On 16 February 1967, Order-in-Council PC 1967-312 was approved by the Governor General and a Royal Commission on the Status of Women in Canada was created. The commissioners were mandated to “inquire into and report upon the status of women in Canada, and to recommend what steps might be taken by the federal government to ensure for women equal opportunities with men in all aspects of Canadian society.”[4]

It was a turning point for women’s rights in this country. The commission’s hearings and its final report (published in 1970) received a considerable amount of media coverage which drew attention, not all of it positive, to the issue of women’s inequality in Canada.

A number of Canadian women were instrumental in advancing the rights of women throughout the decade. Their stories will be featured in upcoming blogs in celebration of the United Nation’s fortieth anniversary of International Women’s Year (1975).