She further noted that there was no reason why the city shouldn’t be moving these people along to nearby shelters where they can “get all the free food they want.” She complained about the “earth muffin” attitude in the city toward the homeless, who she said felt a sense of “entitlement to sit, sleep, relieve, etc. anywhere they want.” She then posted a photograph of the sleeping person online.

Her comments, and those her post generated, reflected the lack of knowledge most Canadians have about the homeless. One person thought that many homeless people have homes but choose to live on the streets instead. My friend observed that homeless people are living with the consequences of their own bad choices.

But it’s not quite that simple. Homelessness is the result of an accumulation of a 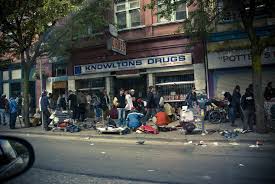 number of factors, not the result of one single cause or a bad decision. Yes, some homeless people do have addictions and many struggle with mental illness. Most have made poor life choices.

For example, most people don’t realize that a significant number of homeless people have jobs but live in shelters because they can’t find affordable housing, especially in cities where the cost of living is high.

Homeless youth often struggle financially as they make the transition from foster care to independent living. People leaving the correctional system, those exiting mental health facilities, immigrants, and refugees are also at risk of becoming homeless. So are seniors on fixed incomes.

Personal and relational factors also figure into the equation. Many homeless people have suffered some type of trauma in their lives such as the death of a loved one, brain injuries, fetal alcohol syndrome, domestic violence, accident, child abuse, rape, and post-traumatic stress disorder. Job loss, layoffs, foreclosures, and the loss of unemployment or welfare benefits are also contributing factors.

Every homeless person has a history. Just like the rest of us who have a roof over our head.

Yes, homelessness is hard to look at. That’s because it demands a response from each one of us. Should we see people living on the street as a problem? Should they be corralled away so we don’t have to look at them? Or do they deserve to be seen?

The homeless are citizens of our cities too. In our democratic society, they have the same basic human rights that we all enjoy. They deserve to be treated with dignity and respect. They are, after all, human beings.

So, the next time you see a homeless person in front of your favourite coffee shop check to make sure they’re okay. Then buy them a meal or give them a gift card so they can purchase one later. Your kindness will not only help them out, but it will go a long way toward dispelling some of the myths about homelessness that we all need to put to rest.

For more information on homelessness in Canada visit www.homelesshub.ca.

Different As Me: A Modern-day Slave, an International Art Dealer, and the Unlikely Woman Who Bound Them Together by Ron Hall and Denver Moore.